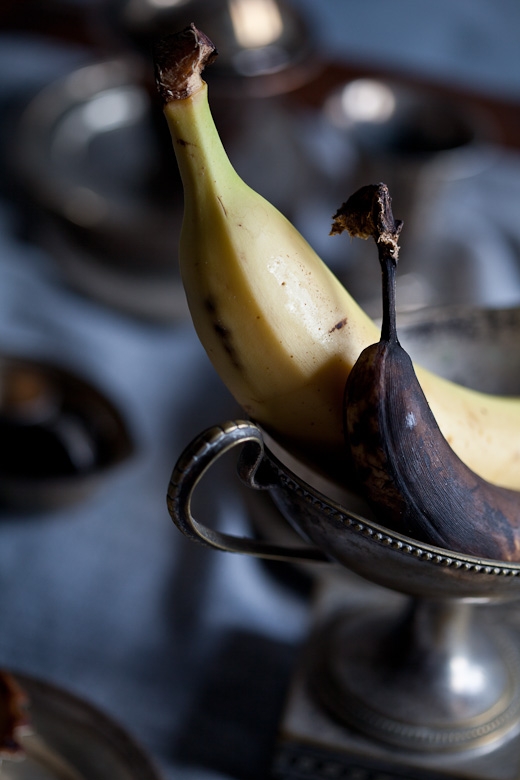 Most Christians know the Sunday school answer to dealing with temptation, the bible instructs us to flee. But let’s be real for a minute, sin is often astonishingly attractive in this fallen world we live in. My anger feels justified. My gossip tendency is disguised as informative or obligatory. My selfishness is coated with reasoning and labeled as self preservation My lust for possessions, prosperity and people masks itself as natural desires. Less offensive sins are often enticing and sometimes go unnoticed in my life because I have been desynthesized to how God views sin.

God hates sin. He hates the big humongous ones, but He also equally hates the little ones. He is greatly grieved with each and every fragment of sin. When we grasp how offensive sin is to God, we understand that sin is kind of like a repulsive, putrid, rotten, mushy banana.

This past week I discovered that my kitchen has some very unwelcome guests: fruit flies. I hate these pesky gross things, especially because they enjoy hovering over my kitchen sink that I must use regularly throughout the day. This morning, I developed an attack plan to get rid of em!

I cut a piece of a rotten banana and put it in the bottom of a cup to magnetically attract them. It was fascinating to watch as they swarmed collectively around the top of the cup. One of the braver flies unable to resist the tempting fruit nosedived and rested quickly on the banana. Nibble nibble nibble. Then zoom, back up joining the others in circular flight. I continued to watch unmoving, because, my goal was to catch the majority of the flies—not just a stray one or two.

Within a few minutes several other flies became overpowered by the permeating fragrance of the rotten banana and followed suit. Each going into the cup, resting quickly on the banana, sampling and zooooooming back up out of the cup. I left the cup in the sink and went about my morning routine. When I returned about thirty minutes later I was quite pleased to see the flies that were once dipping in for samples of the rotten banana were now unashamedly feasting on it. Quickly I grabbed the lid, slapped it on and smiled at the army of fruit flies I had snared with my savvy trap.

Sin is an awful lot like a rotten banana. If you fly around it, hover over it, keep company with the other flies—it can get really tempting. Almost irresistible. The fragrance of sin, the promise of satisfaction eventually lures many Christians into sampling it. We foolishly put tremendous faith in our human willpower to leave, to be able to successfully fly away before we get trapped.

The problem is, a few samples here, a few nibbles there—and somehow without awareness of how it happens we find ourselves easily entangled. We begin to feast on destructive habits that are masked well enough to seem gratifying momentarily. Then, without warning, the enemy who comes to kill, steal and destroy traps us in a cage of sin (John 10:10)! When he has us exactly where he wants us—he slams the lid on the cup and we become unwillingly trapped with filthy, decaying, repugnant, sin.

Trapping these flies became a very profound wake up call in my life. This visual is such a practical reminder of why we need to flee temptation. Don’t stick around and wait for the urge to nibble and sample the luring and seemingly pleasureful promises of sin. Run! Skeedaddle! Bolt! Flee! If sin is like a rotten banana, don’t be as foolish as a fruit fly!

Christina is a young energetic mom to four adorable kids. She’s addicted to coffee, running and pursuing a deeper walk with Jesus. In her free time she enjoys blogging to share random thoughts and the cool things God teaches her at www.madhattinmom.com

The Mess and the Mender

Finding Confidence in a Bigger Story