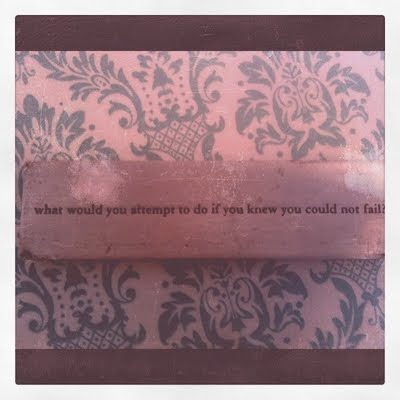 For high school graduation, my principal Ms. Miller gave me a soldered silver paper weight with this simple question engraved in it: “What would you attempt to do if you knew you could not fail?”

When I moved across the country to start college on the East Coast it moved with me. When I had to withdraw three weeks later because of the dangerous battle with depression I was wrestling it got shipped back home. Twelve months later I packed it again to take with me to Pepperdine for my second stab at college. When I was forced to withdraw two years later once again due to depression it made it’s way back to my teenage bedroom. Four colleges and five years later it sat on my desk as I finally had a dipolma under my belt. Today it sits in my WM-home office.

At the time it seemed like I was constantly failing. Failing to finish college. Failing to be happy. I would take one step forward towards my dreams, then to take two huge steps back. But I kept moving.

In failing, my broken dreams became pieces God would pick up and put together to create the dream He had for me. A dream better, richer, more beautiful and outward-focused dream than the one I planned for myself.

I wonder if in your life God is doing the same.

What is it in your life that it seems you’re failing at? What do you think it means to fail forward?

10 Things To Do During Uncertain Times

Letter to My 22 Year Old Self