By WonderfullyMadeOctober 26, 2011Raquel Rodriguez, women of the bible
One Comment 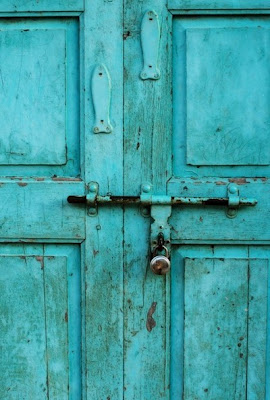 In this exciting chapter of the book of Acts, King Herod is persecuting the early church; James is murdered and we find Peter arrested and imprisoned. But the early church continued to meet together and offer prayers, constant prayers for Peter. One night, God sent an Angel to free Peter and led him out of the prison and unto the street. Where was He to go? This is where we pick up:

So, when he had considered this, he came to the house of Mary, the mother of John whose surname was Mark, where many were gathered together praying. And as Peter knocked at the door of the gate, a girl named Rhoda came to answer. When she recognized Peter’s voice, because of her gladness she did not open the gate, but ran in and announced that Peter stood before the gate. But they said to her, “You are beside yourself!” Yet she kept insisting that it was so. So they said, “It is his angel.” Now Peter continued knocking; and when they opened the door and saw him, they were astonished. But motioning to them with his hand to keep silent, he declared to them how the Lord had brought him out of the prison. And he said, “Go, tell these things to James and to the brethren.” And he departed and went to another place. (Acts 12:12-17)

Not much is shared with us regarding Rhoda. Was she a little girl or a teenager? Was she a believer of Jesus? Was she meeting at John Mark’s home to pray? Was she related to anyone? Who is this Rhoda? The Greek word for girl is paidiskē, meaning a young girl, a damsel, maid-servant, young female slave. We can conclude that she worked at this home and was most likely responsible for answering the door.

When Peter knocks, we read that she recognized His voice. In the Greek, recognize is epiginōskō, meaning thoroughly acquainted with, to know thoroughly, to know accurately, know well. I dare to say that she must have sat and heard Peter’s exhortations, preaching’s and heard of the miracles. We read that upon hearing Peter’s voice she overjoyed and overflowed with gladness, so much so that she forgot to open the door for Him and ran quickly to proclaim the good news.

Can you imagine with me, the excitement in her voice as she tells the praying saints that He whom they are praying for is free and at their door? They mocked her and even accused her of being crazy but she insisted. How far was their faith that even if it were an Angel at the door, they did not react. But Rhoda was persistent.

Rhoda experienced firsthand the power of prayer and the miracle of a life set free. I challenge you today to imitate her. Much like Rhoda we are servants. We serve a great and mighty God. She was surrounded by prayer warriors. Are you surrounded my people who pray? Are you a prayer warrior? Rhoda recognized the voice of a mighty man of valor. Are you able to discern the voice of the Lord? Can you recognize His voice above all others? Rhoda was filled with gladness upon witnessing the goodness of the Lord. When those around you are blessed by God, are you filled with gladness or bitterness?

Rhoda was used by God as the messenger of good news. You are a messenger of the Gospel of Jesus Christ, the ultimate good news. They lashed out in scorn at Rhoda, the person who told them that their prayers had been answered. Beloved Sisters, the world will lash out in scorn at you but be encouraged by young Rhoda who did not keep silent.

In what ways are you a messenger of good news?