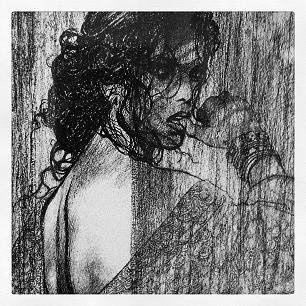 Now early in the morning He came again into the temple, and all the people came to Him; and He sat down and taught them. Then the scribes and Pharisees brought to Him a woman caught in adultery. And when they had set her in the midst, they said to Him, “Teacher, this woman was caught in adultery, in the very act.

Now Moses, in the law, commanded us that such should be stoned. But what do You say?” This they said, testing Him, that they might have something of which to accuse Him. But Jesus stooped down and wrote on the ground with His finger, as though He did not hear. So when they continued asking Him, He raised Himself up and said to them, “He who is without sin among you, let him throw a stone at her first.”

And again He stooped down and wrote on the ground. Then those who heard it, being convicted by their conscience, went out one by one, beginning with the oldest even to the last. And Jesus was left alone, and the woman standing in the midst. (John 8:2-9)

This is how I picture this passage: I imagine a closed door, kicked open by certain religious men. They enter the room and with evil contentment one of them asks, “What do we have here?” It was all so fast and sudden, they all spoke but not a word was understood. It could have been dark in the room and making out the faces of these voices could have been difficult. That’s when a heavy hand reached for her arm and dragged her out of the bed.

Between heartbeats and fighting for freedom, she is able to grab the sheet and cover herself. Not only was she yanked out of bed, but she was dragged and paraded through the city and into the temple walls. There she stood before the man who could condemn her to death. She stood roughly lifeless, certainly hopeless and immorally stained.

Have you ever felt this way?

When Jesus had raised Himself up and saw no one but the woman, He said to her, “Woman, where are those accusers of yours? Has no one condemned you?” She said, “No one, Lord.” And Jesus said to her, “Neither do I condemn you; go and sin no more.” (John 8:10-11)

I have often wondered about this woman’s life after verse 11. Did she allow the guilt of a forgiven past to obstruct her freedom-found future? Was she able to forgive herself? Was she anything like me?

This story gets to me every time. Though I wasn’t caught in the very act of adultery by a vicious group of Pharisees, I have been caught in the very act of sin. And much like this woman, the one who is able to condemn me to death has said to my life, “I do not condemn you; go and sin no more.” He spoke that to me fifteen years ago, but it was only last year that I was truly set free. I had accepted God’s forgiveness yet couldn’t find the courage to forgive myself. Shame and guilt bound my life from living in God’s aisle of grace. Grace I knew of, yet grace was precisely what I had denied myself.

It was through the words of Allie that God used to bring healing into my life, “Grace frees us to walk in the truth that nothing can separate us from God’s love. Our performance cannot; our brokenness cannot, nor can our pride or lack of self-worth.” I was set free from believing that I had to do in order to be fully forgiven; God had both resolved by sin issue and had spoken self-forgiveness. A guilt-free conscious hasn’t been fully settled, but the Lord is working in me day by day.

I do not condemn you. Go and sin no more.

This is all we need upon our pardon. Jesus did not say, “Go, and live a life of guilt.” He has spoken to you this very day, “Go and sin no more.” In other words, go away from your past and enjoy the freedom He offers you. Lamentations 3 reminds us that His mercies are made new every morning. This new year, make it a habit to wake up each day with the words of Jesus, “I do not condemn you. Go and sin no more.”

“The soul of the believer needs grace every moment.” –Robert Murray

How has God’s grace changed you?