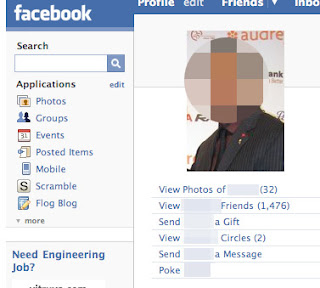 As a former Psychology major, I was recently re-introduced to the term “voyeurism.” Voyeurism is taken from the French term “voyeur,” meaning one who looks. In clincial psychology it is “the sexual interest or practice of spying on people engaged in intimate behaviors.” It is also used in a more general, non-sexual manner to refer to someone who regularly observes others without their knowledge.

Here comes my confession: I’m a modern day voyeur in this age of social media sites. Here comes my supposition: you probably are too.
A primary characteristic of a “voyeur” (the one who looks) is that he or she does not normally relate directly with the subject of their interest, who is often unaware of being observed. How can we possibly directly relate with all 500+ of your Facebook friends!!!
A Few Signs You Might Be A Cyber-Sphere “Voyeur”:
1. When an aquaintaince (aka one of your 200+ FB friends) tells you about their trip to New York or their new dog you smile sheepishly and ask him/her to tell you all about it and pretend you never saw the pictures they posted.
Confession: Just recently I was at a Christmas party and was conversing with someone who told me an old friend of mine from college had just gotten engaged. I pretended like I had no idea of the news, even though just days before I had seen her relationship status change to “engaged.”
2. You read someone’s eye-catching status update, tweet or blog post and intentionally don’t comment on it because you don’t want them to know you were “watching them.” Ummmmm…guilty!
Am I the only “voyeur” in this crazy world of Facebook and Twitter? Humor me girls and share your confessions and tips for sane online living here. Fellow voyeurs, let this be our prayer:

Turn my eyes away from wothless things; preserve my life accordng to your word. – Psalm 119:36-38

119: Advocating for the Sanctity of Life & Healing After Abortion — with Abby Johnson