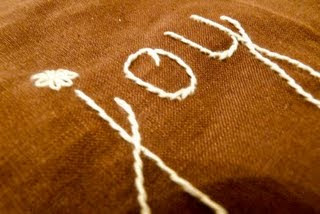 I was changing a diaper upstairs today when I heard an awfully suspicious noise. Not a noise I could actually identify, but one of those “a 4-year-old boy is making God’s outside MUCH LOUDER THAN ORIGINALLY DESIGNED” suspicious noises.
He’d been playing so well with his pet snails.(Yes, I said pet snails…)
I went to the upstairs window and immediately started thumping away when I saw that he was pounding the fence with a baseball bat. He heard the thumping, but couldn’t figure out where it was coming from, searching around with his eyes.
“Keefe! Look upstairs!”
He heard me. And then he spotted me.
And then his whole face lit up into the most precious, genuine smile you’ve ever seen, like I’d just presented him with a “Let’s pretend it’s your birthday!” mound of gooey, chocolate candle-filled cake.
He was DELIGHTED that I had pursued him at the window; that I had so obviously found a new place from which to seek him out and enjoy him. And when I saw that in his joy, I was filled with joy, too.
I waved and smiled back; then gently told him not to hit the fence. (He explained that he was trying to hammer the nails, so we did a little redirection to the nearest large tree trunk).
His joy changed everything.
And how about your joy?
Does your heart just burst with a lovely innocence when you realize that you are pursued by God?
You are, His beloved.
You are His, beloved!
He is jealous for you, loyal to you, and watching for you at the window. (Luke 15!)
Nothing can separate you from that love. (Rom. 8!)
Delight in that reality today!!
By WM Mentor Jen McCarthy

The Honest-to-Goodness Real Secret of Beauty

Gratitude Through the Ups and Downs