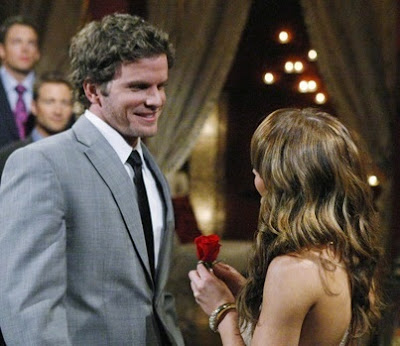 My first year of college I lived on the bottom floor of a brick building, and our television came in the form of bunny ears. (I’m sorry if you don’t get that reference. Google it.) The screen was always fuzzy. You had to position the antennas just right to get good enough signal—we propped them up with books, taped them to walls, and even busted out the aluminum foil with high hopes that we would get a clear enough picture on that one night a week.

Then, several of us girls would pile in to the small dorm room with pints of Ben & Jerry’s (Dublin Mudslide is my favorite flavor—it will change your life, or at least your jean size) and spoons and rising anticipation. We would talk at lunch during the week about it and wait anxiously for this day to come—the day The Bachelor or The Bachelorette came on. We took The Bachelor very, very seriously.

I have spent years watching some of the most awkward moments on television and some of the most hopelessly romantic dates ever put on the tube. Being someone that rarely watches TV, I always wonder at what it is that draws me in. I no longer have dorm room parties and Ben & Jerry’s tempting me to watch, and I’ll even go as far as streaming it from Hulu now that I don’t have TV at all.

This season was no small exception. I’ll admit that I really wasn’t an Ashley fan to begin with. I made the same judgment as everyone else—she’s insecure and it’s annoying to watch. As the season unfolded, things went from bad to worse. You saw it all—the horrible improv comedy night that ended in wounding jokes about Ashley’s body; several guys up and walked off the show, including Constantine who took Ashley home to meet his parents then abruptly dumped her; and then of course, The Bentley Incident.

It was absolutely painful.

For that very reason I now know why I can’t help but watch it all unfold.

These girls—The Bachelorette or the many single girls fighting for The Bachelor each season—they are us. They are every girl. They hurt deep when someone comments on their body, and they feel insecure when guys aren’t interested. It doesn’t change on national television or when there’s a room full of good-looking guys staring at you. Issues are issues—we all have them, and the attention and affections of a man don’t change that one bit.

The music playing, the roses strewn about, the romantic dates on secluded islands—it all starts to make it seem like an attainable fairytale. I am that girl, you are that girl. We have dreams of being swept off our feet, surrounded by guys wanting us, or of fighting for that perfect guy. We hurt when they don’t want us back, and we feel embarrassed and ashamed when they pick someone else despite our best efforts.

The truth is that the romance will never look the way it does, perfectly edited for TV. There are guys like Bentley out there that will play you and guys like Constantine who won’t want you back. You don’t have to pick those guys, though.

As hard as it feels sometimes to find one, there are guys that love and fear God first. Guys who don’t want to just win the girl, but want to know her heart and serve her. I’m in it with you—this waiting and this looking. I’ll also be with you, watching the Bachelorette every season trying to remember what’s real in this reality TV, knowing that this candle lit romance is nothing like the one the Lord has for you.

Here’s to not picking the Bentleys of this world, and to feeling just like Ashley sometimes.

Do you watch the Bachelorette? If so, how has it changed (for better or worse) your view of love and relationships?